It was recently the birthday and I was so lucky to have my carnivore sister and vegan daughter here for a few days. Normally it passes in a bit of a "just another day" but this was quite neat. Not even a significant birthday either.

We went out for dinner to a yummy South American place, and the next day after we dropped the sister off at the airport, the daughter and I went to a plant-based restaurant close to town and it was quite yummy as well. Massively yummy. On the way back, we dropped in at a plant based bakery and bought donuts and they, too, were extremely yummy. Kilos were gained, my friends. Kilos.
Then the next day we went and adopted cats.
Two tabby girls, around five years old, from the SPCA. 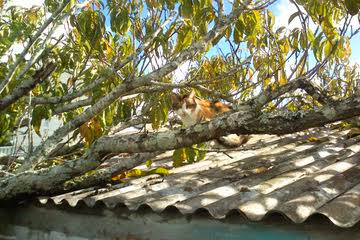 Our darling New Kitty, a demented calico cat, who once spent a week living on the garage roof under the peach tree, had died earlier this year and I had thought, as you do, that I would never get another feline, not for a long time. But over the past few weeks I'd been thinking that maybe I would consider it. With some strange work hours going on in this house, sometimes you get home and the silence is deafening. After years of listening to Metallica and Pantera and whoever else happens to be playing in the boys' rooms, when you get home from work at night and there is no one home, no Satan heavy-metal music playing, it is kind of creepy to have that silence and I've been taking a pass on playing music of late, nothing appeals. So I'd been thinking that maybe a security nice cat might be the go.
So after we dropped the sister off at the airport, we went to the SPCA to have a look at who was up for adoption. I rather fancied a ginger cat, and there were some lovely gingers there. Years ago we briefly had a ginger cat, a lovely fellow, and the ginger cats I've met seem to be fabulous kitty cats.
But there were also these two tabby girls, and they were bonded (most likely sisters) and had to go together.
So we pondered it, and when we went back the next day to make the choice, the two girls were still there so I thought, what the heck, chances are they'll be harder to home, so we adopted them.
They are quite lovely and I suspect, might be a bit mischievous. They have settled in well and spend a fair bit of time on the window-sill gazing intently at the pigeons and assorted bird life that congregate on the neighbour's roof.  It will be at least another week, perhaps longer, before they can venture outside, but in the meantime they have their own room  for night time, and for when no one is home, and seem quite happy, cheerful cats. Although they are probably not happy and cheerful at all because, after all, they are cats. And who knows what cats ever think?
Interesting times ahead.
~ Joanne
at July 28, 2018 Links to this post

A laugh for when I'm long gone

I've been thinking of late about the value of keeping a diary. Not a "woe is me" diary of embarrassing angst (that you will watch burn into ashes one day when the angst is just a humiliating event of your past and no one must ever know a la the teen years) but a diary of day-to-day events. 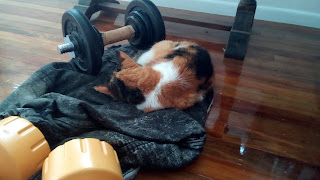 My father used to keep one. It was just a hardcover exercise book, and every day he'd write down interesting things related to life, like calling the vet out to the farm, going to the sale yards to buy heifers, a mate popping around, Jo arriving with the kids to stay a week for the holidays....!
At times, I've done this, though not religiously.
I have one entry in a book (90% empty, fyi) where it says I'm in bed writing, and the three cats, Boy Kitty, Girl Kitty and Mirrie are there.  Mirrie was a stray, considered an imposter by the "Kitties" I'm sure. They never got on, so this image is clearly a (rare) blissful moment.  When I first found the diary years later, I remembered it. Boy Kitty, Girl Kitty and Mirrie, all three of them lying on the bed (note with significant distance between them) while I'm writing away on the laptop.
Cats are the best.
RIP you three.
I am thinking about this now because I met a woman recently, having a huge property dispute with an ex partner. He denied they had ever lived together, because she was claiming her legal share of property.
She remembered an article being written about him years earlier,  that it was published in a local paper, and there was a photograph of them in their house. It was proof, she hoped, that they had lived together because all these years on, there was little proof at all. It was quite a crazy story, but she needed this photograph - whenever it was. Yet none of the possible newspapers it could have been in are digitised. There's no way of finding out which issue it was in, beyond a vague memory of a year and a newspaper. The only way to find the pic, will be to go through issue after issue of newspapers she think it might be in, and it will take hours and hours and hours. It''ll be worth it in the end if she gets her share of the property, but boy, talk about time consuming. Not to mention how it is a dispute gets to the stage where she has to have real proof she lived there, when it happened over ten years ago.
If only she'd kept some kind of day to day diary, I was thinking, because a reporter coming around and interviewing you would surely be something you would put in there, amidst the mundane.
If only, and then she'd have a day or even a month to work with. If only...
Maybe my dad's idea, an exercise book in the kitchen where you can just take a few minutes to write down things every day, is the easiest. Just the random stuff of life, the stuff that doesn't seem important. That isn't too personal it ends up in a fiery heap one day.
My sister's here for a few days,  Mum rang and Aunty Bonnie is in hospital, the car failed its warrant of fitness, and the cat has found a new place, sleeping on the floor.
At the least, it might be good for a laugh for the fam, when I'm long gone!
at July 15, 2018 Links to this post