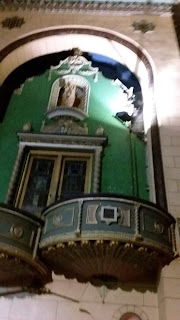 I recently had the opportunity to take a look at a theatre which is, hopefully, about to undergo restoration. It was part of a heritage-themed talk where the presenter took us into the old, deserted, falling-apart, you-name-it, theatre, and we got to go right to the bottom, below current road level, to where excavation has taken place. There's a photo of the rubble at the end of the post. It is dark and gloomy and dusty but amazing. The photograph to the right is looking up from the rubble at the royal box. Even its current state, it is something special.
The theatre is circa 1920s, so not ancient, but hasn't been used for decades. There were movie theatres attached to the complex over the years, which have been demolished, but the actual theatre itself, with its balcony seats and projection room (and projector) are still there, as are many of the fittings. From down below you get a sense of what it could be again.
Interesting when they excavated they discovered cobblestones which they believe were part of the original butchers premises, before the site was used for the grand theatre. They hope, if it does indeed get the go-ahead (meaning the mega million dollars of finance) to be restored, that these stones will be polished up and will be a feature, able to be seen beneath the new flooring.
As with writers, it has given me an idea for a background to a story, involving big money and heritage restoration. I'll see if I can put a new twist on an old story-line!