If you're going to write about a favourite author, then why not start with the best.

And that would be Nora Roberts.

I first discovered the novels of Nora Roberts back in the day at a second-hand bookshop, the ones that I don't think exist any more. You know the shops, where you'd take in a stack of  paperbacks, you'd sell them for a dollar or two, and then get the money credit against your purchases. Man, I loved that. There has always been debate about them, because the authors get no royalties on a book once its sold second hand, but I may not have discovered one of my most favourite set of stories ever if not for those crowded and musty little bookshops, where I could browse the books and buy them cheap. And those stories were Nora Roberts Donovan series. At the time, there was Captivated, Entranced and Charmed. I fell in love with those books and not long after, when I heard that Nora herself was going to be at the Australian romance writers conference, I was in! In fact, several of us Kiwis went over for the conference that year, and it was a blast.

At the time I was editing a wee magazine our writers group had, and I decided to interview Nora herself, in a bit of a "Chat with Nora" segment, and was lucky enough to get a half hour or so with her at the conference, which I think was in Sydney. What do I recall in my nervous and awestruck state? The clothes. The fabulous clothes. And that when we sat down, she wore sunglasses. Now, I was a bit suspicious about this. Why wear sunglasses inside? It was winter. What was that all about? Were American romance writers divas?

Well, it turns out Nora had had the flight from hell all the way from where she lives in the eastern USA, and the poor woman had barely set foot on Aussie soil, and she was jetlagged. I think she explained it to me, as we sat across from each other, me star-struck and Nora just bloody fabulous, answering my daft questions. (This was pre-internet for me, so pretty much anything I knew came from the pages of the old Romantic Times magazine so there a lot of questions.)  It was also the time where the Janet Dailey plagiarism situation was really going hard. Also, Nora was not only in Australia but was heading to Japan as well for writerly business. There was a lot going on, and honestly, Nora Roberts was just amazing. Fabulous.

Anyhoo, I didn't have a photo of me and Nora. There's a thing about us Kiwis, we tend to be a bit reluctant to do the whole gushy thing in public although now, in the selfie era, that has probably changed. But in lieu of a photo, I got a copy signed of one of the books I bought at the conference , which also became a favourite series: the Stanislaskis.

Since then, a number of the books have become keepers.  The MacKades, The Calhoun Woman. Three Sisters Island Trilogy.  Even remembering these, I see a trip to my bookcase to re-read them all over again.  Anything she writes about Ireland. (I'm of Irish heritage, although I've never been there). The Irish Born  series is a wonderful series. Of the single titles, one to single out would be Birthright.

A year or so later, I went to a Romance Writers of America conference, and one of the freebies was a box of tissues promoting the MacGregor series. On the flight back to NZ, I had a bit of a panic attack on the plane and things got a wee bit messy amidst the panic. (No surprise I am not much of a fan of flying overseas.) It was only when I got home I realised something horrific. My McGregor Tissues weren't there. I looked everywhere for them and they just were not in my luggage. I could only conclude that the tissues, that I had guarded from the moment I got them, had got pushed under the seat during the panic attack incident. It took me some time to get over the loss of the MacGregor tissues, I can tell you!! 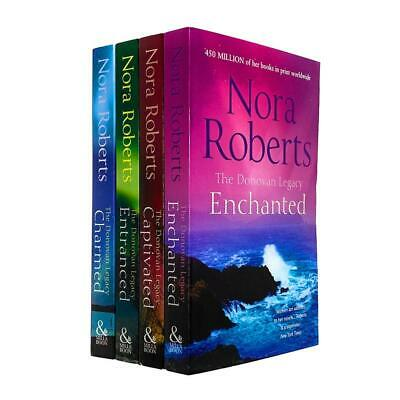