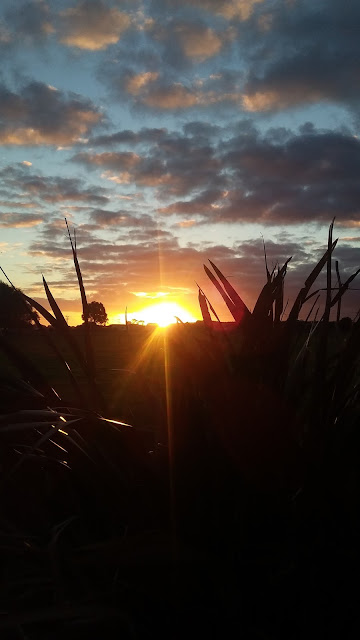 I was down on the farm recently, when I spotted the most gorgeous sunset.
You don't often get to marvel at such a sunset like this in the city, surrounded by buildings and trees, so I rushed outside with the phone, and took photos.
I was wandering around snapping away, when I noticed people standing at the end of the drive, on the road. Being as it was about to get dark, and these people were just sort of standing there, doing nothing (it didn't look like they were changing a tyre or anything mechanical) suspicion set rapidly in.
A while back, the farmer across the road had discovered the remains of some his sheep which had been butchered overnight. Hideous stuff, notwithstanding it was theft.
I rushed inside to grab the binoculars, dashed upstairs to look out the window and admittedly it took an age to focus with the things and the people were blurry, but success. I had these potential perps in my sight.
They stood on our side of the road but they didn't face our property. That is, it didn't look like they were sussing out the property, eyeing up the cattle, or anything like that for their vile crime.
This was interesting.
Were they checking out the farm across the road? Was it for sale? Were they planning to camp on the roadside?
More and more curious.
Then suddenly two of them dashed into the road, stopped in the middle. and turned around.
Of course.
They were taking photos against the same sunset. I imagined, given they were blurry, that they were a young couple, maybe engagement or wedding photos being taken, but they could just has easily have been middle-aged with my eyesight. Or tourists taking advantage of the scene. They were posing in the middle of the road.
Very cute, I thought.
Peace was restored in my over-active imagination, and soon the sun had set. It was cold enough for the fire to be lit in the lounge, a book to be read, and maybe, somewhere out there, a happy couple looking forward to admiring some beautiful photos.
~ Joanne
at April 29, 2018 Links to this post

Remembering the victims of war.

On a serious note, yesterday was Anzac Day in New Zealand, a day of remembering those who fought in wars, from the Second World War to Korea and Vietnam. 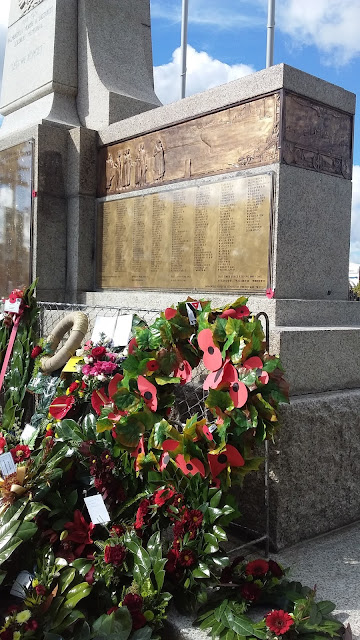 I was staying out in the country, and in the afternoon, we headed into town to take a look at the wreathes placed around the clocktower in the Square, where the official service had been held that morning. I'd noticed the seats being set up the day before, temporary grandstands, and had wondered what they were for.
Duh. The dawn service.
We read the cards and I was particularly struck with the wreathe from the Korean War veterans.
I'd been reading about Korea for some research the week earlier, and how for veterans it felt like the "forgotten" war.
In this recently-published history, there had been an interview with a man who had been just 17 when he'd been to Korea on a navy frigate. Seventeen!!
Just a kid, and that was the problem. He was just a kid but he was fighting in a war, with all that came with it.
He recalled how when he came back to New Zealand near the end, it was as if he was indeed just a kid again. It was as if he'd never even left.
He couldn't vote, he recalled, he couldn't drink alcohol, he couldn't do anything.
And yet, he said, he had been in a war.

I have taken up knitting because... why not? It is not something I have every tried to any great degree but there is something about sitting there, knitting away and being productive that has a lot of appeal. My mum always knitted, back in the day when my sister and I got to choose the wool for our cool ponchos and in our teens, our cool jerseys. I got to thinking about kniting a while back when some of my younger colleagues at work were talking about it and I thought, why not? A friend offered to teach me but we never seemed to be able to get together and so one day I borrowed needles from the knitting bag in mum's cupboard, surfed videos, but then decided to go old school, and borrowed a book from the library. It wasn't much chop, to be honest. Quite confusing. But then I had a mental image of how to cast on and knit, most likely from the last time I decided to learn how to knit when I was twenty or something, and surprisingly it worked.

So I have finished my first actual piece.
A black scarf. There are lots of holes in it. Thus is must be worn only with black.
There are also several bits where I had put down the needles half way through a row, then when I picked it up had no idea which needle was for which. Most times I got it wrong and it came up all bumpy. I guess there's a technical term for that.
But I really like it. It's quite addictive, kind of fun, the thought that one decade I may be able to knit my own custom second scarf, is kind of exciting.  Plus it's a neat thing to do when you don't want to do anything else. Good fun. Especially if your standards are low. Darned good fun.
at April 11, 2018 Links to this post 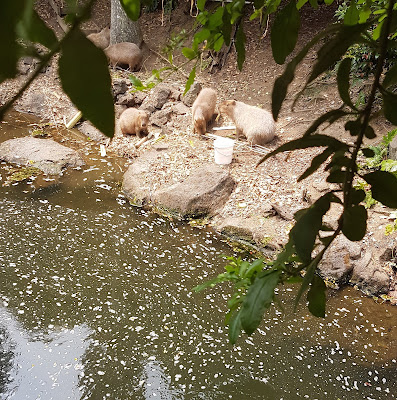