Well, it's just over 24 hours until we go into a four-week Lockdown. I just heard on the news that 20% of the world's population is in lockdown.

Last night I got an exercise book and began writing daily posts, backdated from when it started to get real, this whole thing. The earliest reference I had to Covid-19 was noting the signs in the doctor's surgery when I went in on Monday March 9th to get my asthma prescription, which I did to make sure I had the inhalers if I succumbed to the virus. That was all. Preparation in the event of...
I started thinking about keeping a day-to-day detailed diary, not because I EVER ever ever thought we'd go into a lockdown, or that jobs would be lost, and the world tossed into disarray, and death tolls would rocket, but just because, why not.

When it was announced here on Saturday 14th, that anyone coming into New Zealand, even from Australia, would have to go into a two week self isolation, it became serious. My brother was coming over for five days (next week, actually) so it all came closer to home,  and he cancelled his flight. Not the end of the world at all, at that stage. Just an inconvenience. The next day I went to visit my mother at her rest home and when they asked if I'd had any contact with anyone who'd been overseas and had gotten back in the past two weeks, I mentioned one of my workmates, so I couldn't see mum for a week. And I thought that was bad. 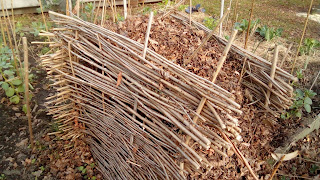 Now, we're on  the cusp of going into the lockdown, and I will be working from home. (I still have a job, phew!) I thought it might be sensible to have a non-laptop based project I can dabble at each day that doesn't involve making cakes or biscuits, and then eating them. I am thinking about fashioning something like this rustic-looking compost heap.  I saw it at an historic museum last year, and was quite taken with it, and think its very do-able; Scope the backyard tree for similar sized branches, cut them down, strip the leaves, and assemble it and see if it works out, and how long it takes until it ends up a mess of twigs on the ground because I am no builder/engineer.
I guess I'll see how it goes.