I spent all day yesterday working on a new book while my just-finished one is with my beloved reader for their personal opinion.

I had a goal of writing 5000 new words yesterday but as the book is one I'm picking up after about four years (I do have a draft dated 2017) I ended up deleting about 2500 words and was back to where I was at the beginning, plus shifting a few scenes around for the pacing, but it is coming together and will be book three in the Clearlake County series. Current deadline: late March. 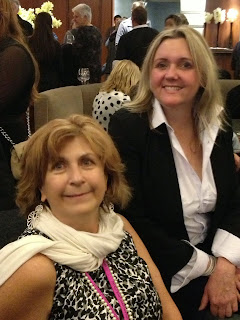 I actually remember where I was when I first came up with idea for this story. I was in Melbourne at a writers conference one year (I am thinking this was probably about 2012, something like that) and one of the many things I love about attending a romance writers conference is staying in the hotel. I think it was the Langham, a totally posh hotel. I love hotels They fascinate me so I figured a story where the heroine is in the hotel industry would be a good start.

So today hopefully, on another rare day devoted to the story, will actually be the day I hit that 5000 words.

And in the spirit of romance writers conferences and hotels, here's an old pic from 2013, taken at the hotel in Wellington with my writer pal, Rowena.