I was down at the farm last weekend when I took this photo. I was about to make the 45 minute walk from the farm to the airport. The farm is only minutes out of the town and on the airport side, so quite lucky, really. 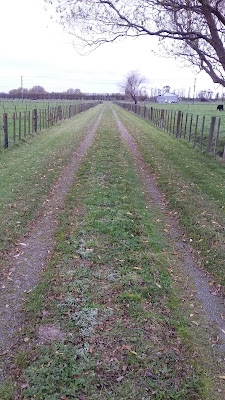 I could of course have taken a taxi, which I used to do, but what a waste of money when I have legs that are working. Plus I fly carry-on most of the time, so its not like I'm trudging along country roads with a wretched suitcase in tow. That would be a drama in itself plus its a reasonably busy road where you're constantly having to walk through grass so you don't get run over. The times I've flown down there at night, I've had to navigate the roads in the dark and that is pretty dodgy, I can tell you. Plus you wouldn't believe the rubbish that ends up on country roads, quite disgusting. Last time I did have a suitcase so I went to the airport as soon as check-in opened to check it in, then drove back to the farm, and walked back to the airport. Timed to the minute and not without some drama, I tell you, but I made it. Anyhoo, as I was leaving the house this past weekend, and thinking how I should ask my brother to drive me down to the end of the drive on the ride on lawnmower to save myself that bit of the walk, I took this picture. FYI he doesn't drive, hence all the walking, and of course I'm not going to ask him to get out the lawnmower to drive me down the drive. But I like this image. Rural New Zealand in winter.
While I was there I watched a movie called Their Finest. Set in World War Two, it was a terrific story  about a woman who ends up writing propaganda films for the British government. There were some good relatable bits about the creative process, about brainstorming together and plotting, but it had a quite surprising bit near the ending. In fact, when that particular bad moment hit, I immediately thought, how are they going to get out of this one, so that the film ends on a positive note because it has to end on a positive note. It truly must.
Well, they managed it, and in a quite unexpected way.  Maybe others had the happy ending figured out, but I didn't, and without ruining the film if you haven't seen it, the ending to me was all about just how important optimism and hope are in creative work, in the story itself.
I read somewhere that in moments of great peril such as war time, entertainment like movies are even more important because we, the people, need to see something that maybe takes us away from the bad time we are in, some escapist entertainment, but also something that gives hope.
A movie well worth watching, I thought.
~ Joanne
at June 29, 2018