A bit of library trivia

I've had some fun recently doing a bit of research on how the romance genre came to be which was, in a phrase, Mills and Boon.
I didn't realise, for example, that the company cemented themselves as a romance publisher in the 1930s and that it was due in a huge part to the private or circulating libraries that abounded, especially during the war years. We had the private libraries here in New Zealand. I have a vague memory of going with my grandfather, when I would have been only about five (he was killed just before I turned six)  to one in his local town. I remember the beige-coloured covers the books all had, but that's about all.
In the UK, however, it was the Boots and WH Smith private libraries that were huge. 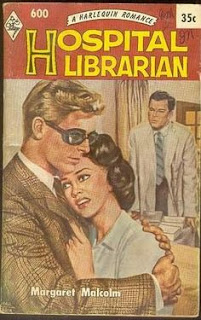 You paid a subscription and could get a book out at a time, or pay as you went. Romances were the most popular genre.
By the 1960s the popularity of the libraries was waning due in part to government legislation to encourage the building of public libraries for all, along with the cheapness of paperbacks.
The cover to the right is the Harlequin, not Mills and Boon, cover from the early 1960s.  The Mills and Boon version was called Jan Marlow, Hospital Librarian. Author Margaret Malcolm published over  a hundred novels between 1940 and 1980.