Not so Guilty Pleasures

The end of the year approacheth and along with it, the addiction to Australian Masterchef, which has been going on for months. I could, of course, have looked up months ago to see who won, and yes, I was mightily tempted at times. Mainly because of the way it dragged on and on and on and on and on.... But I did not give in.  Unlike reading a thriller where I often look at the end, and ruin the book. Nice to know I have some self control.

Now, we are "supposedly" in finals week but... guess what? One week has passed, and there is still another week to go!  Finals fortnight, more like. That may be the fault of the TV programmers on the network here, I don't know, but the whole thing is mighty suspect, if you ask me.
Yet still I watch, frequently confused as to what the heck they are doing and what those ingredients even are, and in theory, there should be only one week to go which means, it will free up a bit of time.
Having said that, a few weeks ago, the Great Kiwi Bake Off began. This is more like it.
At least, there,  I have a fairly good idea what flour and sugar are. 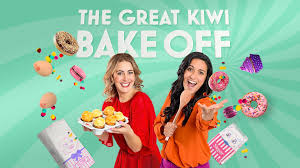