I had family around this weekend, so we went out for a drive, to a "reclaimed" suburb of Auckland, Hobsonville Point, where there is a farmers market. I had thought I might buy some gifts at the famers market. You know, artisanal things like honey. Then I saw the price, and just opted for a cabbage, cheap strawberries and some potatoes to go with dinner.

Back in the early part of the 20th century, Hobsonville was an airforce base, and from the local history images and text you can read there, it was a true community of families that grew up around there. It was way out in the boondocks,  and it was sited next to the Harbour, and it seems that those families who made Hobby their home, loved it there. 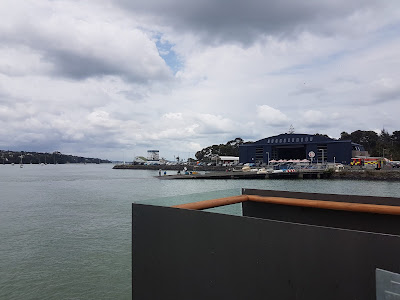 Now, it has been reclaimed into a planned urban development that has a bit of a Lego land feel about it as you drive through. Brand new townhouse complexes and apartments, a same-ness to them, even if they are architecturally designed and look quite flash. It is a new style of urban living here that, if you can afford to buy (I doubt they're cheap), perhaps appeals to families who don't want much land to care for, and those who are nearing retirement and also don't want lots of land.  Or maybe they're affordable and they're a way to get into the housing market. Or maybe they're all rented, I have no idea.  I just know I felt claustrophobic driving through it, and even more so at the acres and acres and acres of land that are still to be developed into, I suppose, more townhouses and apartments. I was quite pleased to be going back to my boring old house bereft of architectural merit, with my overgrown albeit small back yard in desperate need of a mow, and chickens roaming over the patch.
The bay, though, is a nice development with bars and cafes, and there are walk and cycleways, and down at the bay itself, you can catch a ferry at specific times back to the Auckland CBD. I plan to do that one day on a bit of a tiki-tour. 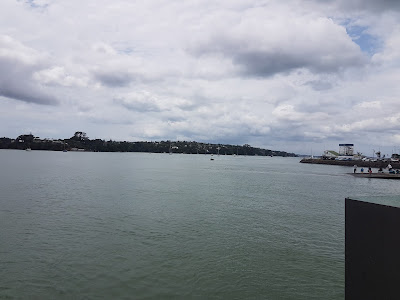 It was a nice way to spend a few hours, have a bite to eat, enjoy the sun, as it was a lovely day, spend time with fam, and watch all the people taking their dogs out for a walk. Not a bad few hours at all.