New title for The Daniel Deal

I have a new title for the first book I published, now known as... The Daniel Deal. 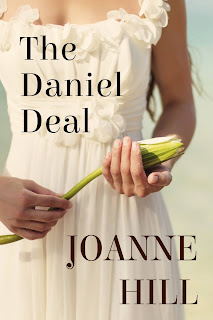 It was originally called Daniel's Bride, then I changed it to Marrying Melinda, but for reasons (my next release is called Marrying Michelle and no other title will do!) I had to come up with a new title, and it is now The Daniel Deal.

It's a marriage of convenience story set in Sydney, with a gorgeous, alpha hero, Daniel, who comes from old money and is running the family empire while his brothers have absconded overseas, the selfish brats! One of my readers told me she loved the story but wanted to give Daniel a kick up the butt! I kind of see what she meant. The heroine is Melinda, who's just been jilted, is out of a job, is worried about her invalid mother who must live in a home, and so she takes up Daniel on an offer to be his wife, an offer she can't refuse.

There is also a wee Jack Russell called Barnaby in there.

Here's the blurb from my Amazon page:

A sweet, modern romance packed with heartwarming emotion, a touch of humour, a marriage of convenience.... and a wee Jack Russell Terrier called Barnaby, who is about to change everything, in The Daniel Deal. (Previously published as Marrying Melinda).Daniel Christie’s beloved grandfather, Sir Arthur Christie, is dying, and Daniel knows there’s only one way to make his last weeks happy ones – to give him the one thing he’s always wanted – the promise of heirs. All Daniel has to do is fall in love, have the wedding, and follow it with lots of little Daniels.Well, that’s not going to happen any time soon. So Daniel comes up with the next best solution. He hires jobless Melinda Green to be his wife.Mel has good reason to accept Daniel’s crazy deal. Her bills are mounting, and with her invalid mother needing ongoing care, Mel knows a few months as Mrs Christie, with the massive payment at the end, is a gift from heaven. And just because Daniel is rich and he’s gorgeous doesn’t mean she’ll end up with “feelings” for him. After all, her fiancé just dumped her for her best friend so men are totally off the radar.Or, so she thought, because the Daniel deal is about to change everything!Come downunder to the big smoke of Sydney, and meet the Christies: wealthy Daniel and his bride, Melinda: a woman he never expected to fall in love with, let alone have change his heart in the process.

Here's the link on Amazon.

And it is also available for Nook at Barnes and Noble.